It was saddening to hear last month of the end of Walter de Maria. He was visiting his 100 year old mum in California, he being a mere strip of 77. He was the most quizzical of artists,arriving from the world of bands in which he was drummer, the New York of the mid sixties, the neo-fluxus world of happenings.
He has left us with at least four major enigmas, that remain utterly fresh to the imagination every time you consider them. Thanks to the Dia Art Foundation, they are maintained, where they need to be, and at varying degrees of inconvenience, can be visited at any time. The Broken Kilometer still glistens from the ground floor of an industrial building in West Broadway, New York, and the Earth Room is still warm and humid in Wooster Street. The Lightning Field is a little more tricky in the desert of New Mexico, but it can be done as a pilgrimage.
But the piece that fascinates me perhaps the most is the Vertical Earth Kilometer in Kassel, Germany made in 1979. You can go and see it, but all you get is

You are asked to believe that the plate, set in a square of sandstone, descends a whole kilometer into the earth. It is a structure of belief, as is the notion that the fronds of lightening will play in their designated field in New Mexico. Walter de Maria’s work indeed seems to resound with the idea of belief, as the proposition of conceptualism, and he is perhaps its main proponent. We have to believe in the detail of time and geography of a work, say by Richard Long, before we can move to the next step. 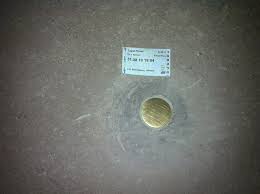 I was staying with German friends in Kerry when Claudio told me that he collected espresso cups, and had quite a sizeable collection of them. He wondered if there might be an Irish one to add. I was most dubious about the idea, and said that although Illy Cafe had been in my valley for a decade at a drive of some 20 kilometers away, I thought it unlikely. That morning we went to a cafe on Valentia Island and to my surprise I was given an espresso in a fully Irish espresso cup. It wasn’t new and evincing nostalgia, but probably one from the original Bewley’s Cafe on Grafton Street in the bloom of cafe society, and probably the only place of its kind in Dublin. I was so enchanted with the coincidence that I asked the waitress if I could buy it for Claudio’s collection. She in turn was so delighted that such a collection might exist at all, that she washed and dried the cup and gave it to me.

I notice that Steptoe Brother or Del-Boy of the art scene is shelling-off some of his ill-considered wares at a Christie’s auction in October, at the time of course of the Frieze Art Fair. Apparently, there’s no room for it at the respectable auction house, so it’s being held in a Post Office warehouse. And there’s no reserve prices, so you could pick up your very own David Batchelor for a fiver, or some other sub-Culbert piece as illustrated in the clipping above. Of course, there’ll always be a Chapman or two in such yard sales, with increasing regularity. This shameless piece of David Batchelor is incidentally called ‘Brick Lane’. Where does he come from?

At last someone has managed to put on a Finlay show that might do the work some justice. There has been so much dithering around, so much lack of insight into a full exhibition, that you wonder if it will ever take place. In lieu there are a succession of smaller offerings of mostly printed work from private holdings. I saw one was held in some sort of taxi shed in Pimlico earlier this year : then there’s this, and I see another on the horizon in Portland Oregon, from the collection of Stephen Scobie, I presume. There is nothing amiss with a show based on publication, in fact it is a seminal cause, and Finlay’s work is a triumph of that. But not as an excuse for a more complete airing of all the work in all its facets.  Nonetheless, this display at Arnolfini in Bristol which runs until early September, looks magnificent in its arrangement, fresh, light and aerated, the opposite of a mordant attempt at the end of last year in one of the bigger emporiums. I just wish they would give up on other artists’ responses to work being shown! What a bad idea, and how confusing. For instance, what is that little gridded thing in the middle of the floor that I spent ages trying to reconcile with Finlay, thinking it must be a maquette for a photograph for a postcard (maybe one to be called Swastika Compass! ) – then I thought it was the inlay for a table by Graeme Murray that he may have left with Ian Finlay. Eventually I realized it was some other persons work entirely!

But well done Axel Wieder for this show. I should have known, as pro qm in Berlin from whence you come is one of the great bookshops.

You are currently viewing the archives for August, 2013 at workfortheeyetodotoo.